Brussels, 7 August 2017 – The general business climate in Europe may be improving, but European advertising and marketing companies’ business confidence has fallen sharply in the first two quarters of 2017, according to the latest European Advertising Business Climate Index, issued by the European Association of Communications Agencies (EACA). 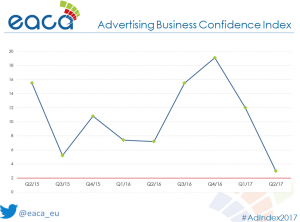 The new survey shows that business confidence in the ad industry decreased from +12 in April 2017 to +3 in July 2017, another drop from the peak of +19 at the beginning of the year.

The results are largely impacted by three economically powerful countries which hold large shares of the advertising market in Europe – the UK, France and Italy. In July, the UK registered the lowest confidence reading of all the EU member states at  -29, while the French confidence index remained negative at -5. The Italian ad industry experienced a business confidence drop from -4 to -21, from January to July 2017. 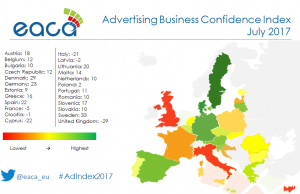 These three countries also report significantly lower demand than previously. For example, over the last quarter the advertising industry demand has decreased from -3 to -5 for France and from -7 to -28 for Italy. The weighting co-efficient of these countries is likely to have influenced the overall findings.

The perception of demand as a limiting factor to the advertising business has increased from 37% to 42% between Q1 and Q2/2017.

The downturn in the confidence level of the European advertising industry is also evident in the way the companies perceive business development in Q2/2017. There is a significant drop from +8 in Q1/2017 to -2 in Q2/2017. Moreover, the expectation of prices for the next three months shows a negative change from +10 in Q1/2017 to 0 in Q2/2017.

Conversely, the employment situation seems rather stable for all regions of Europe. Western Europe maintains the same level of employment confidence (+19) as in the previous quarter, as does Central/Eastern Europe (+9). Mediterranean and Northern Europe even show slight improvements between Q2 and Q3/2017 (+7 to +9, and +27 to +30 respectively).

Two countries that have considerably improved their overall business confidence over the last quarter are Greece (from -15 to +16), slowly recovering from recession and Sweden (+10 to +33), the highest value of all the countries in the Index. Together with Denmark, Sweden makes Northern Europe the leading region in terms of confidence for price, employment and demand.

EACA will publish the next edition of the European Advertising Business Climate Index in November 2017.