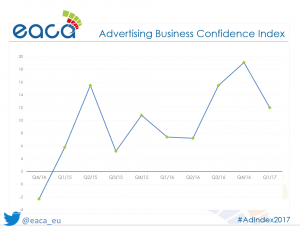 The new survey shows that business confidence decreased from +19 in January 2017 to +12 in April 2017, halting the confidence boost experienced in the ad industry since the second quarter of 2016.

The outcome could be linked with a decline of confidence in the UK, now down to +10.1 from the +38.7 exhibited in the previous quarter. Although the British ad sector was on a strong path of recovery following the Brexit vote, this seems to be changing, possibly due to uncertainty following the triggering of Article 50 and formal exit proceedings from the EU. Another country that is significantly down (+10) from their previous result (+33) in the confidence index is Sweden.

Conversely, Greece has risen from -41 in Q1/2017 to -15 over the last quarter. Business confidence may be improving, but the result is still the lowest of all the EU member states. Austria, Croatia, Denmark, Estonia and the Netherlands enjoy the highest level of confidence recorded in their countries since the beginning of 2016. Croatia leads all the member states in April 2017 with the +41, just ahead of Germany (+39). 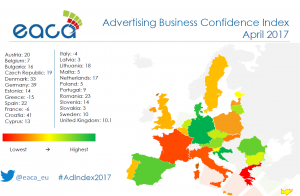 The European Advertising Business Climate Index shows a decline in confidence about the evolution of demand for advertising services over the past 3 months, down from +25 (Q4/2016) to +9 (Q1/2017).

As in the past year and a half, advertising and marketing companies from Northern Europe continue to demonstrate the highest expectation of demand for their services (+35) compared to other regions. The expectations have seen a minor drop from +37 in the previous quarter, similar to Central/Eastern Europe, down from +14 (Q1/2017) to +13 (Q2/2017). Western Europe has risen from +23 to +24. Expectations in the Mediterranean region have continued to slide since Q3/2016 and are now in negative at -1.

Confidence about the evolution of employment has declined sharply over the past 3 months, from +14 (Q4/2016) to +4 (Q1/2017). Employment prospects show positive improvement in the Mediterranean, from -3 (Q1/2017) to +7 (Q2/2017). The expectations in other areas are more stable and comparable, being similar to the previous period results.

Finally, the Index indicates that confidence about selling prices is expected to stay the same as in the previous quarter at +10.

EACA will publish the next edition of the European Advertising Business Climate Index in August 2017.