Brussels, 13 February 2016 – Business confidence levels in the European advertising and marketing industry continue to rise for the third consecutive quarter reaching +19 in January 2017, which is a modest boost from October 2016 (+16) but a significant one since July 2016 (+7), according to the European Advertising Business Climate Index released today by 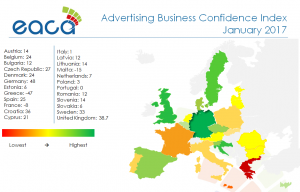 The British ad sector seems to be on a strong path of recovery after the Brexit vote, exhibiting a confidence boost from +4.1 in October 2016 to +38.7 in January 2017. German, Swedish and Croatian markets also record high  levels of business confidence, +48, +33 and + 36 respectively. Following a general growth trend, Belgium, Denmark and Cyprus demonstrate more confidence rising from +14 to +24, +9 to +24 and -9 to +21, respectively. 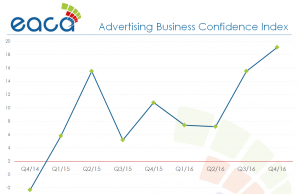 As in the previous quarter, advertising and marketing companies from Northern Europe continue to demonstrate the highest expectation of demand for their services (+37). Western (+23) and Central/Eastern (+14) follow suit while the Mediterranean region is less optimistic (+2).

A generally positive morale across the European ad industry, apparent throughout the Index, is also reflected in employment trends and expectations figures. The ad industry reports that confidence in employment levels rose in Q4/2016 to +13 from +1 in Q3/2016. The industry is also increasingly positive about the evolution of employment in Q1/2017 (+24) demonstrating a steady growth since  Q2/2017 (+3).

EACA will publish the next edition of the European Advertising Business Climate Index in May 2017.