Brussels, 17 May 2016 – Europe’s advertising and marketing industry experienced a decline in business confidence in the first quarter of 2016, according to a report released today by the European Association of Communications Agencies. The drop in confidence is offset by moderately positive expectations by the industry regarding the evolution of demand and employ 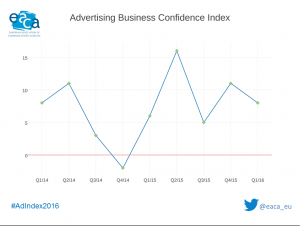 ment in the short term. This mild optimism appears misplaced, however, as the actual development of demand for services and employment indicates a decline or stagnation in both cases.

The European Advertising Business Climate Index, based on monthly data collected from advertising and market research companies across the EU
for the European Commission (DG ECOFIN), indicates a drop in levels of business confidence in the advertising and marketing sector with its business confidence index falling from +11 to +8 (from January to April 2016) as an average across EU member states. 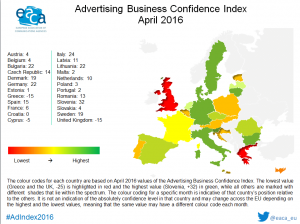 ents confidence levels for Europe’s largest and most advanced markets for the first time. The French (+6), Swedish (+19) and Italian (+24) ad sectors show a steady growth in confidence for two consecutive quarters. On the other hand, German (+22) and Polish (+3) companies are less confident than in the previous two quarters but still positive. The confidence of the UK market has been very volatile, fluctuating from -10 in October 2015 to +9 in January 2016 and falling sharply again to -15 in April 2016. This is almost certainly due to business uncertainty related to the referendum on EU membership.

The demand for advertising services across Europe remained the same (+8) as did demand expectations (+12). The advertising industry has, however, experienced a moderate downward trend in employment evolution in Q1 falling from +10 to +7. Nevertheless, the employment expectations of the industry rose from +5 for Q1/16 to +8 for Q2/16.

Advertising companies from Western Europe (+11) still demonstrate the lowest expectation of demand for their services in comparison to Northern (+23), Central/Eastern (+12) and Mediterranean Europe (+15).

When asked how they expect their firm’s employment to change over the next three months, companies in Western and Northern Europe were more positive; expectations increased from +7 and +10 in January 2016 to +9 and +13 in April 2016, respectively. Conversely, Mediterranean and Central/Eastern Europe were less positive in April than in January 2016 (expectations decreased from +6 and +7 to +3 and 0).

EACA will publish the next edition of the European Advertising Business Climate in July 2016.