Brussels, 08 August 2016 – Business confidence in the European advertising and marketing industry remained stable in the second quarter of 2016, a surge in confidence 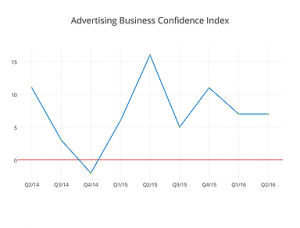 levels in Italy, Spain and Greece balanced out by a decline in larger Western European economies such as the UK and France, according to the European Advertising Business Climate Index released today by the European Association of Communications Agencies. 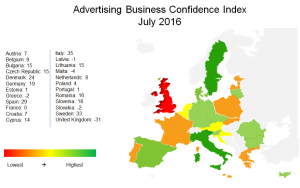 n the uncertainty over the EU referendum, business confidence in the UK dropped significantly from April to July this year (from -15 to -31) and is now relatively the lowest in Europe. The French, German and Polish ad sectors all experienced a slight decline in confidence, falling from +5 to 0, +22 to +19 and +3 to +2, respectively. Conversely, Italian companies (+35) enjoy the highest confidence in the last two years while Sweden follows suit with +33, a significant jump from the +19 in the previous quarter. Finally, Spain showed +29, the highest it has been in the last year.

The demand for advertising services across Europe rose to +10 in Q2/2016 from +6 in Q1 while expectations for Q3 fell from +13 to +6, indicating a much more cautious industry sentiment about the political and economic future of Europe. The same discrepancy between actual evolution and expectation is also evident in employment trends. The advertising industry experienced a positive employment evolution in Q2 rising from +7 to +10 while employment expectations fell from +9 for Q2/16 to +3 for Q3/16. 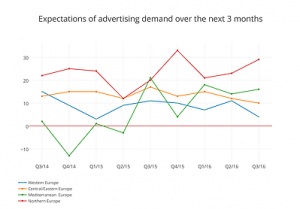 r their services in comparison to Northern (+29), Central/Eastern (+10) and Mediterranean Europe (+16), although overall expectations remain positive.

When asked how they expect their firm’s employment to change over the next three months, companies in Western Europe were less positive; expectations decreased from +10 in April 2016 to +2 in July 2016, whereas the Mediterranean, Northern and Central/Eastern European regions were much more positive in July than in April 2016 (expectations increased from -2, +13 and 0 to +3, +23 and 10, respectively).

EACA will publish the next edition of the European Advertising Business Climate in November 2016.