Brussels, 1 February 2018 – Business confidence in the European advertising and marketing sector in the second half of 2017 shows low yet stable levels of confidence which are showing no signs of upward movement, according to the latest European Advertising Business Climate Index, issued by the European Association of Communications Agencies (EACA). 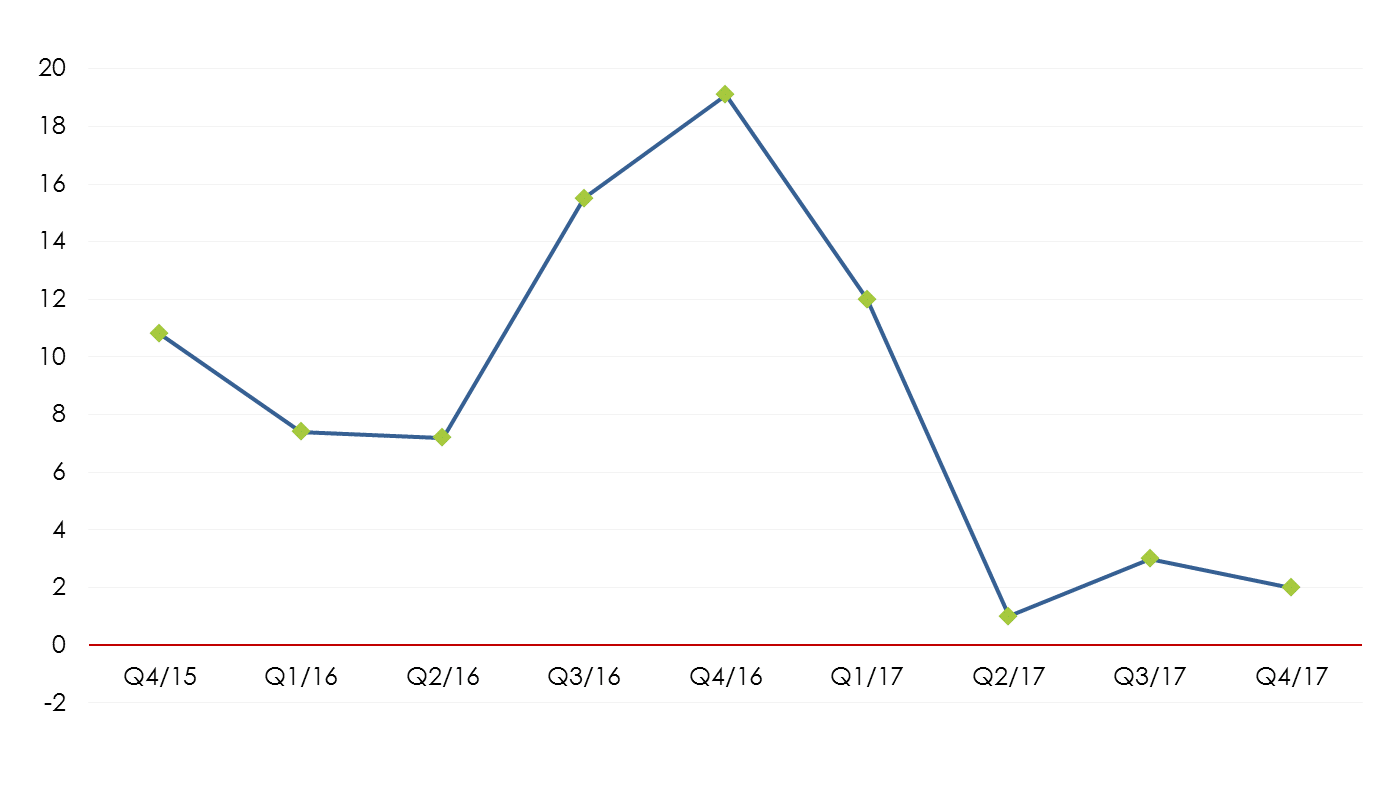 The latest report shows that business confidence in the ad industry decreased one point from +3 in October 2017 to +2 in January 2018. It is 17 points less than at the same time one year ago. In sum, the past year comprised a rapid decline from a clear confidence peak of +19 to a barely positive level throughout the second half of 2017.

The results could be partially driven by the recent decrease in business confidence in the UK, Italy and Germany over the last quarter. These countries hold some of the largest shares of the advertising market in Europe. The UK has gone from -20,7 to -26,2, Italy from -5 to -28 and Germany from +29 to +26 between Q3/2017 and Q4/2017. According to the latest results, Italy’s confidence index is the lowest of all the European countries measured, the UK’s being the second lowest. 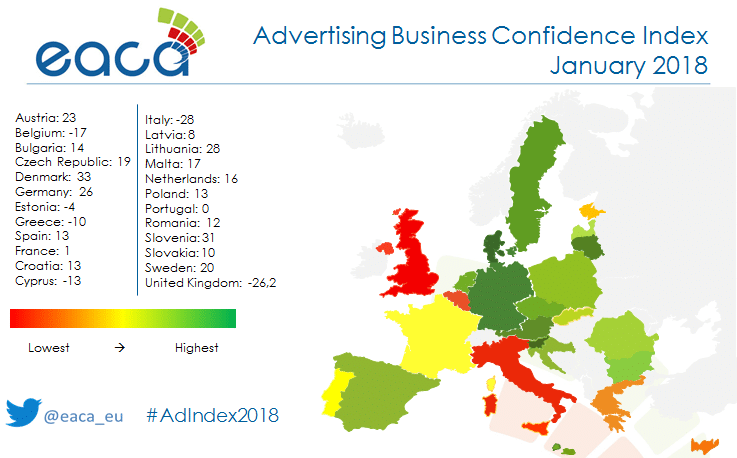 On the other hand, other sizeable advertising markets such as France, Spain and Poland have climbed slightly higher in the index: France from -4 to +1, Spain from -6 to +13 and Poland from +7 to +13 over the last quarter.

The index shows that the reported business development has stayed the same at -4 over the past six months.

While some of the readings report increasing confidence over the last months, the outlook does not appear as bright looking forward. Firstly, the evolution of demand has increased from -4 to +3 between Q3 and Q4/2017 but the expectation for demand in Q1/2018, at +7, is down from the +16 measured in Q4/2017. The demand is expected to slow down everywhere except in Northern Europe. Demand for services accounts for the biggest (44%) factor limiting the advertising business in Q1/2018.

Secondly, in terms of employment, the latest results signal a steady positive rise between Q3 and Q4/2017, up from +5 to +9. Unfortunately, the expectation of employment in Q1/2018 is down at +9 from the previous +18, with a rapid decline foreseen particularly in Western Europe.

The expectation of prices has also experienced a drop, down at +6 in Q1/2018 compared to +9 in the previous quarter. Prices are expected to decrease or stay the same everywhere except in Central/Eastern Europe, where they seem to be growing for the third consecutive quarter. Interestingly, the employment prospects also seem to be improving in Central/Eastern Europe, an exception to the general downward trend.

Two countries that have most improved their overall business confidence over the last quarter are Spain (from -6 to +13) and Slovenia (from +19 to +31). The biggest falls in confidence are experienced in Cyprus (from +13 to -13) and Italy (from -5 to -28).

EACA will publish the next edition of the European Advertising Business Climate Index in April 2018.