For the first time in the European Parliament’s history, the two major blocs (the conservative EPP and the social-democrat S&D groups) have lost their majority. This gives rise to speculation about a new coalition. It is highly probable that the liberals (ALDE) and/or the Greens will form part of this coalition given the significant increase in seats on both sides. Voter turnout was just above 50%, the highest since 1994 (56.67%). 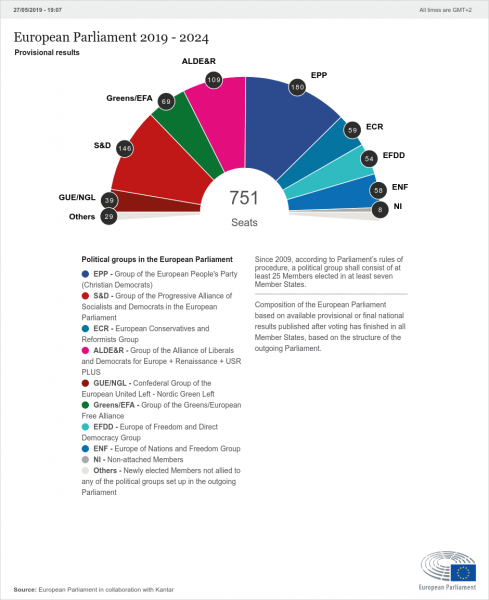 Whilst Eurosceptic parties won more seats than ever before, their popularity did not turn out as high as expected. The Parliament is still made up of  more than 70% of pro-EU forces. As expected in the UK, Farage’s Brexit Party conquered over 30% of the votes reflecting the strong voice of the Brexiteers, while the LibDem came in second place with 20.3% of the votes, significantly increasing its results compared to the 2014 election (6.9%). In France, as in previous EU elections, Le Pen’s party came out on top, despite Emmanuel Macron’s efforts to create the Renaissance list with the European liberals. In Italy, Salvini’s League won around 33% of the votes in the country.

Whereas the number of elected Eurosceptics puts many in Europe at unease, specialists argue that these groups are deeply divided and their popularity in the Member States is unstable.