EACA together with WFA, ACT, egta and IAB Europe wrote an open letter from the global and European advertising and media industries expressing concern at planned Polish advertising levy.

We write to express our concern at the recent proposals by the Polish Government to raise significant new levies on advertising.

We all share a common objective to help the Polish economy regain the losses incurred through the COVID-19 pandemic and to rebuild the livelihoods of those who have been particularly affected. The advertising market itself has been significantly impacted by the pandemic – IAB Europe estimates there has been a 9% reduction in ad expenditures in the last twelve months[1]. This reduction in revenues has a consequent impact on the ability of all media to invest in new reporting and productions, and the provision of trusted and high-quality ad-supported content & services offered to Polish citizens.

While we fully understand the need to rebuild public finances, it is our conviction that taxing advertising is not the right way to do so, given the value of advertising to the economy, society and consumers.

The strength of advertising as a driver of growth and jobs is due to the unique role of advertising in supporting competition by informing consumers about goods and services, helping to increase consumer choice, and driving innovation by incentivizing businesses to outperform their competitors through differentiated products and services.

Consumers benefit from media and internet services on a free of charge basis as a result of advertising. Advertising in Europe accounts for 75% and 40% of radio and TV revenues, respectively. It also pays for internet services so that people can benefit from personal mail, search, web access and social media for free or at a significantly reduced rate.

The proposed Polish advertising levy would negatively impact all these benefits of advertising:

We understand that advertising must be done responsibly and do its utmost to meet societal expectations. That is why the industry has invested so much effort in building and upholding advertising standards. Today, through Rada Reklamy, Poland benefits from having one of the world’s leading advertising industry regulators which monitors, polices and controls advertising.

The proposed act on the new advertising levy also includes a significant increase in Polish programming quotas for television programs (from 33% to 49%). The EU Audiovisual Media Service Directive already calls for the promotion of European content (including those produced in national languages), and this is already adequately reflected in Polish regulation. The change would mean that Polish content would almost fully meet the required minimum share of EU quotas (above 50%) to the detriment of EU productions from other countries, often valuable to and expected by Polish viewers.

This proposed increase in programming quotas, along with a new tax on advertising, would impact budgets and lead to a deterioration in the quality of programs produced in Polish, thus having the counterproductive effect of discouraging viewers from watching Polish local productions.

While the industry commits to always strive to improve advertising, we would like to respectfully remind the Polish Government of the benefits of advertising, which are pervasive and run through the fabric of society.

We therefore kindly request that you ensure that the overall impact of the proposed advertising fee, including its unintended consequences, is fully assessed and that you therefore reconsider the validity of its introduction.

We remain at your disposal for any further clarifications that you may need and would be honoured to have the opportunity to discuss this matter with you in further detail. 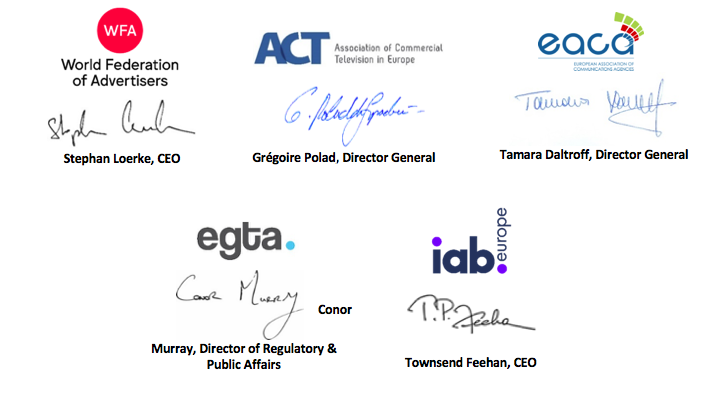